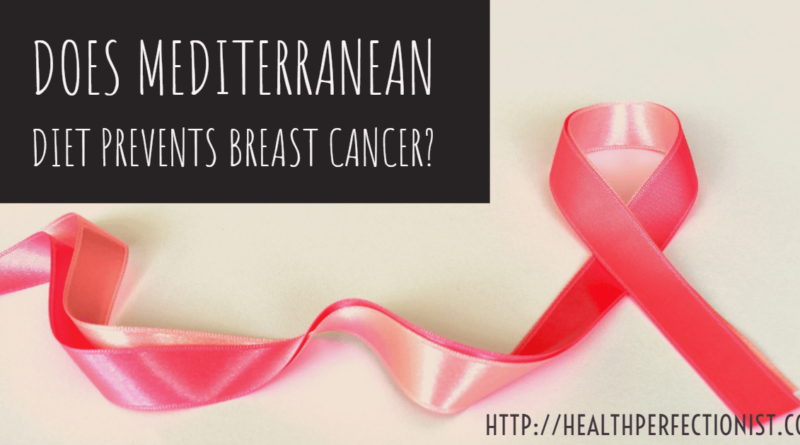 In the United States, a woman’s chance of being diagnosed with breast cancer goes up from about 0.5% (1 in 233) during her 30s, to about 4% (1 in 27) by the time she reaches her 60s. The risk factors we know about for breast cancer include increasing age or having a first-degree (mother, sister) relative with the disease. Research has also tied being obese, having a sedentary lifestyle, use of hormone replacement therapy and high alcohol intake to an increased risk.

So how do we get the risk numbers to move in the right direction?

One answer comes from a new study that suggests postmenopausal women who eat traditional Mediterranean diet foods might be successful in preventing breast cancer than those with different eating habits.

The researchers found that among 14,800 Greek women those who kept most closely to the region’s traditional diet were less likely to be diagnosed with breast cancer than those whose eating habits were least like this.

The subjects were chosen from Greece as it is considered the home of the Mediterranean diet and a large segment of the population still adheres to it naturally.

The participants completed detailed dietary questionnaires and gave lifestyle and demographic information. Each participant was given a Mediterranean diet score, from 0 to 9, based on how often they ate according to the plan (veggies, legumes, fruit and nuts, whole grains, fish and olive oil or another source of monounsaturated fat) and were given more points for limiting meat and dairy.

Over the course of the study, 240 of the subjects were diagnosed with breast cancer.

Women with the highest adherence to the diet (scores in the 6 to 9 range) were 22% less likely to develop breast cancer during the ten year study period than those with the lowest scores (0 to 3) – who ate least like the traditional Mediterranean diet. Factors like age, education, smoking history, weight and exercise habits were taken into account. The link only appeared in women who had passed through menopause, not in younger women.

The Mediterranean diet isn’t so much a diet plan as a way of eating for life, and is nothing like the typical American diet.

Science has long thought that this way of eating might help explain why countries in the Mediterranean region of the world have lower rates of heart disease and some cancers (including breast cancer) compared to other places in Europe or the U.S.

Don’t forget to check our Ultimate Guide for Mediterranean Diet and Weight Loss. You will find some great recipes and grocery list available as well!